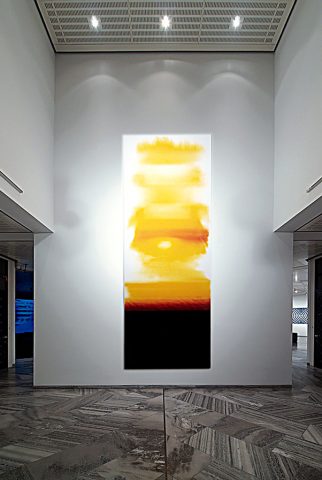 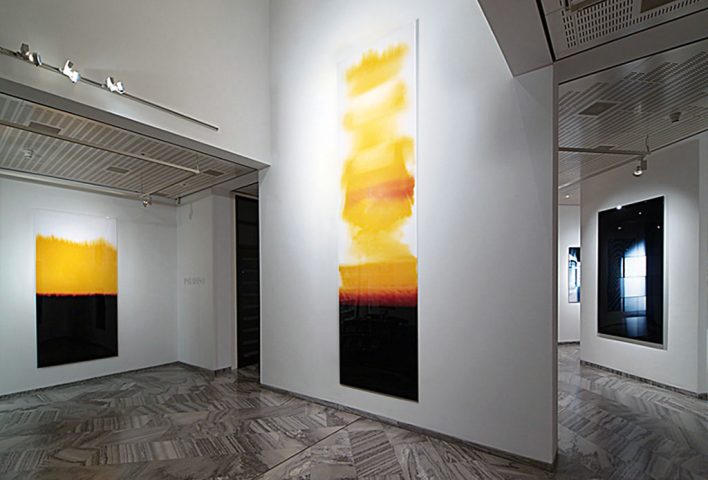 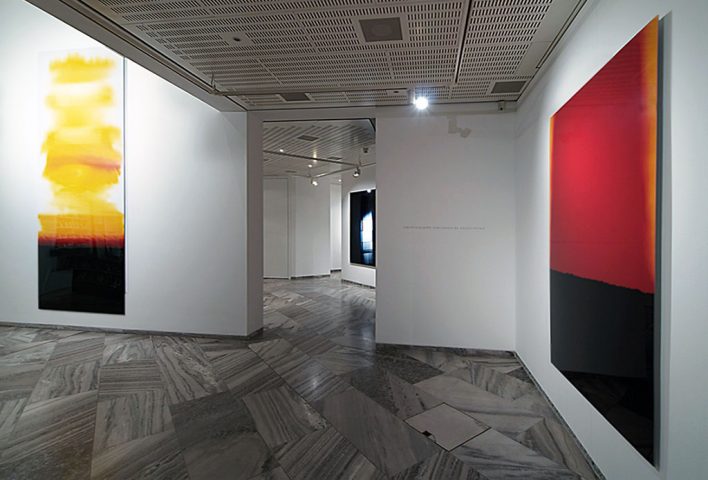 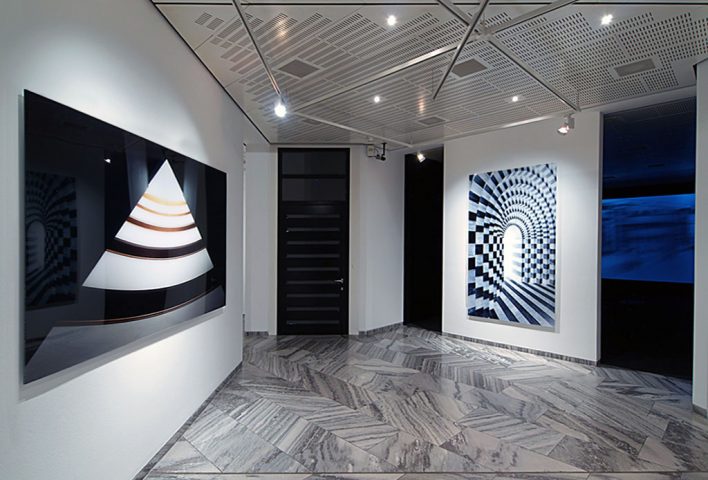 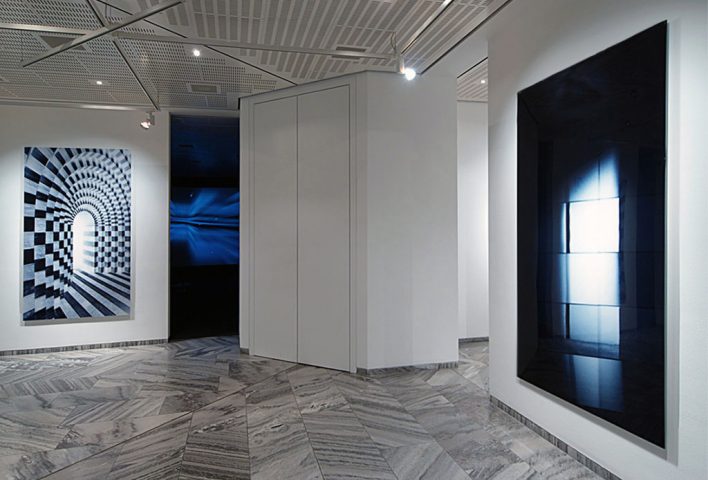 Paradiso is composed of two distinct and complementary parts: The Truth, or the set of photographic works, and The Treasure, the video work for which a room has been set aside in the exhibition. The artist has concentrated on the architecture of the Galleria Gottardo exhibition space and of the Bank that contains it, interpreting it through the use of photography and video to create a special relationship between the place and the work.

Paradiso is the result of exploration of the spaces designed by Mario Botta, and of the intuition of an idea of architecture seen as the art of making emptiness inhabitable. This concept is connected to the poetics of the artist on the themes of absence, emptiness and elsewhere, which recur in all his photographs and multimedia installations.

The large photographic works on the walls and the video projection form the itinerary of a real and symbolic voyage taken by the visitor through the show: the work Paradiso is conceived as a place of experience whose static and dynamic, visible and concealed parts are interconnected in a single network of visual cross-reference.
The artist looks for a guide, an underlying law, in the architecture: in his voyage through signs, canons and codes of space he explores the threshold between present and elsewhere, between material reality and immaterial entities. Along the way he creates images that are metaphors of the place, based on resemblance as well as disappearance and transcendence.
The work Paradiso is composed of timeless images of eternal places.

The four rooms of the gallery are conceived as the places crossed in a voyage: the Tree of Paradise is the Map of the Treasure.

The first room represents the origin, where the visitor is faced with three abstract photographic works, apparently lacking definable visual references: Totem, the largest work in the show and the cornerstone of the entire project. Yellow and Red, sculptures of light and color, positioned symmetrically with respect to the entrance, macroscopic enlargements of the initial strips of the rolls of film used by the artist. Fragments randomly exposed to light and irregularly developed by the chemical process. Their surprising visual power comes from the unpredictable capacity of the film to independently generate a true photograph, doing without the iconic will of the photographer: these are pure images of language, inscriptions of light and color. This cycle of works, which the artist calls “photography before the picture” and also “light echoes”, does not generate representations, in the traditional sense of the term, but radical forms of becoming and possibility: allusions to the structuring and dissolving of real space that await the visitor in the following rooms.

The middle room contains three photographic works, positioned at the center of each of the three walls. At their sides the pairs of doors that divide and join the other three rooms of the gallery open symmetrically. Each of these large images represents a place of passage: Pyramid, the luminous ascending perspective figure generated by the balconies and the skylight of the adjacent Bank building; Treasure, the reflected image of the entrance to the great Caveau, 18 meters below the feet of the visitors; Apse, a perspective detail of the Church of San Giovanni Battista at Mogno, also designed by Mario Botta, interpreted by Wolf as a concave and convex structure inspired by the idea of Islamic architecture.

This is the inner heart, the spark and root of the entire project. The projection room, with a suspended screen, for the video work The Treasure is the place of a magical subjective voyage through the works of the exhibition and the bowels of the site. The visitor identifies with the experience of the subject, whose floating eye descends and enters the mysterious space below, entirely clad in reflecting and opaque metal surfaces, which the artist interprets as the binary codes, the inscriptions of this deep place. The exploration of the impenetrable space, impermeable to the gaze, created to give invisible form to what it contains, happens along three successive, gradual paths. As in a process of exegesis that gradually increases the density of interpretation of Reality, the wandering gaze of the subject penetrates the place, and as the cold surfaces slowly dissolve they reveal their secret, which is not material in nature. The evident and the hidden both appear, the near and the infinitely far: echoes of light, stellar spaces, a universe the subject crosses as if traveling in a spaceship: a mysterious listening station. The fluid sequence shot finally leads the subject back to a complete perception of the place; through an ascending movement, symmetrical to the initial descent, the voyage comes to an end but also begins again, a fantastic loop in space and time.

The fourth room in the exhibition, conceived with a symmetrical scheme, as the place of the double, contains the cycle of works Elsewhere on the longitudinal walls: negative, blurred visions of the steel surfaces of the Treasure, almost a zero degree of vision that alludes to a not-only-retinal interpretation of reality. With a dominant cold, desaturated blue tone, this series of works represents the evidence of a deep, invisible space whose codes and mysterious presence are re-inscribed by Photography.
Two large double works, Sefer and Shell, conclude the exhibition itinerary. The first, which alludes to the forms of a book, offers itself as the surface for possible writing and viewing; the second leads toward a metaphorical dimension of architecture that accompanies the traveler-visitor inside and afar, encouraging him to search further, through the image, for the Truth of the time and the place.

For the exhibition a public presentation will also be held of the book Paradiso, Photography and video by Silvio Wolf, with texts by Francesca Pasini, Lyle Rexer and Silvio Wolf,  published by Contrasto and Galleria Gottardo, graphic design by Studio Theredbox Communication Design. The book, which is part of the entire project, is like a Tree of Paradise and Treasure Map to accompany the reader in the voyage through the work of the artist and includes a DVD with backstage and interview to Silvio Wolf.